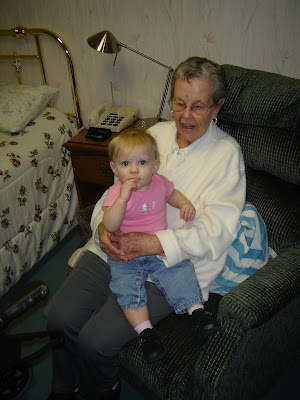 One of Lucy's favorite things to do is go visit Grandma Great. That would be my Grandma. She moved down to Kaysville a couple of months ago to an assisted living center, so we try to go over once a week and visit her. Lucy thinks it's great because she can crawl all over the floor without anyone telling her "NO" or stopping her from touching stuff. There's just not alot to get into. 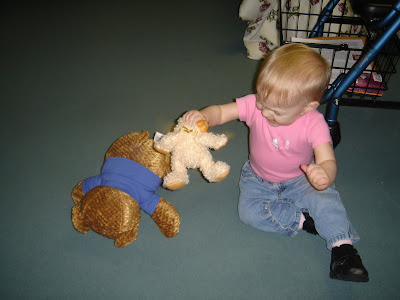 We like to play with Grandma Greats bears and climb on her walker. 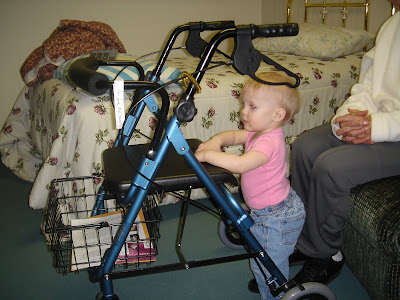 Posted by ScottBoomer at 5:04 PM 2 comments:

Last night we went a pretty messy auto vs pedestrian. This guy was crossing the street on North Temple, while the light was green for trafic coming north and south. He was struck by a pick-up and knocked about 70ft.

When we got there he had alot of head trauma and both legs were obviously broken. He had a weak pulse but wasn't breathing. So we went to work. A chopper was called in and we got him into the ambulance where he went into cardiac arrest. When the flight team arrived they worked him for a little while then ended up calling it.

This is where the fun started for us. We had to wait for the medical examiner to come and get the body. So we sat there on scene for over an hour with this dead guy in the back of our rig while we sat up front doing paper work, calling our wives and listening to the radio.

The moral of the story is "Don't jay walk." Let this be a lesson to all of you.
Posted by ScottBoomer at 7:00 AM No comments:

Okay well maybey not me personaly but my profesion is, both of them. According to a survey by cares.net.nz Firefighters were #4 and Ambulance Drivers were #5. The rest of the list is as follows-
Doctor
Nurse
Teacher
Firefighter
Ambulance driver
Soldier
Scientist
Police officer
Caregiver

On the oposite end of things the least respected profesions were
Politicians
Lawyers
Real estate agent
MP
Journalist
Advertising executive
Car dealer
Company director
Accountant
I'm pretty sure all of these people in these professions make more than me, even though I apparently command more respect.

On a side note the survey found that prostitutes had the worst job but commanded more respect than politicians.
Posted by ScottBoomer at 3:23 PM 1 comment:

I Pity The Fool

This is from my friend Dave. It's some of Mr T's early musical work. Truly some of his greatest work, well after the A-team, that Rocky movies he was in, that short lived carton show in the early 80s he had, his wrestling career, his various tv comercials, any guest appearence he's ever done on any TV show or movie and well any thing else he's ever done.
Posted by Dave at 2:14 PM 3 comments:

Record Setting Day on the Ambulance

We had a busy day on the ambulance in Salt Lake City. My previous record for transports to hospitals in a 24hr shift was 10. We beat that by one my new record is now 11.

Now I know what your thinking, we must have had alot of hurt and sick people in our city. That would be wrong. Six of the eleven were people who were so drunk they couldn't stand on their own. And because of that, the police can't take them to jail. So we get to deliver them to the hospital where the doctors and nurses are ready to greet us with open arms, and are happy to give these people a bed to sleep in until they sober up enough to leave. In case you couldn't tell, I was being sarcastic about that last part.

We did have some cool stuff though. We had a stabbing, and also a guy who was drunk and his house caught fire while he was in it. He managed to stagger outside onto the porch otherwise he might be dead. 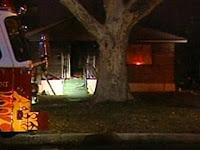 Because of all these calls we managed to get to bed at 6 am, and slept until 8 am when we went home. Which after I got home and went to sleep.
Posted by ScottBoomer at 6:56 PM 2 comments:

Latest on the tumor

Lariann had an MRI and an apointment with her Oncolygyst today. It was quite the ordeal for us. It took her two hours to get her MRI done, they were backed up at LDS hospital and they had to redo some of her scans.
Once got to her doctors apointment the radiologist had not sent up his report and the MRI's, we waited for two hours and still nothing. Her doctor felt so bad he wiaved his office visit fee and gave us a half eaten tin of candy of his desk, yeah that was weird but then it got weirder when in the hallway he appologized again and gave me a hug.
He called us back later and told us the tumor has shrunk significantly which is good news. He said that the cysts are still growing which has him puzzled since usually they only grow if the tumor grows. So he and some of his fellow doctors are going to get togther and talk about it and try and decide what is best to do then get back with us.
Posted by ScottBoomer at 6:11 PM 3 comments: