Some of you may recall this awesome picture of my sister in law that I put on my blog just after Easter. 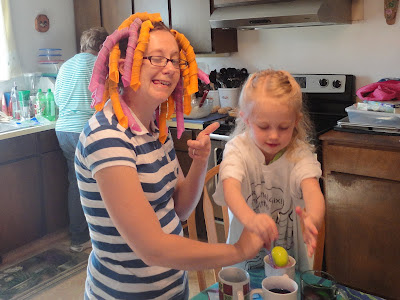 Apparently Rachel did not think it was as funny as I did, though she didn’t notice till three weeks after I had put the picture up. I got a text from her after she saw it, she said, “You are dead!!!!! Once again you have proven that I should have left you in the desert. There may be spiders in places you least expect them. Yes I finally read your Easter post.”

“Strong words”, I thought. Well then the other day Rachel sent this picture to my phone. 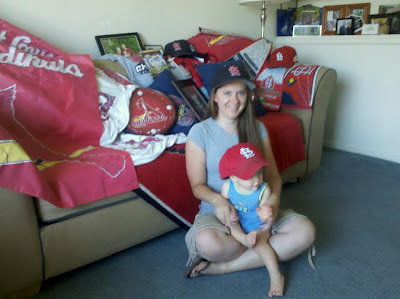 She had taken all my St. Louis Cardinals stuff, while I was asleep. Actually it looks kind of awesome in this picture, I have some cool stuff and I think it’s a good look for her. Ariane had let her in to gather everything and even pulled stuff out of my room before I went to sleep. I think Araine felt bad about her roll in this robbery, so she went and picked the stuff up from Rachel’s the next day.

Now the question is, do I get back at her or do I call it even and we both walk away. To answer that I’d like you to meet one of my favorite couple Nikki and John, they are an engaged couple who play wild pranks on each other. They were also the most repeated pranksters on MTV's "Pranked." It starts out harmless at first Then it gets messy Then it gets annoying Then it gets scary Then it gets painfull Then it gets brutal Is this really the road that Rachel and I want to go down? I suppose only time will tell, but most likely yes. For awesome Nikki and John pranks, check out their web site http://nikkiandjohn.com/ I should warn you though, the language gets a little rough.
Posted by ScottBoomer at 6:35 AM No comments:

Last week for family home evening we taught Lucy how to play baseball, sort of. Lucy went and got her a small bat, a glove and a soft ball. My parents came over to help us out. We played a little catch with grandpa. 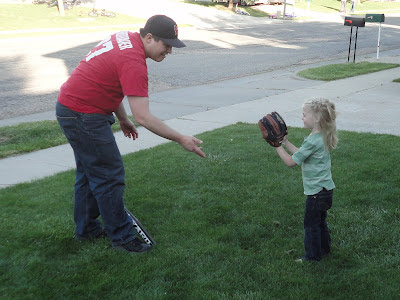 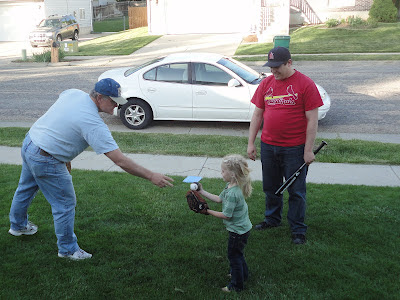 Then grandpa and I took turns helping her try to hit. 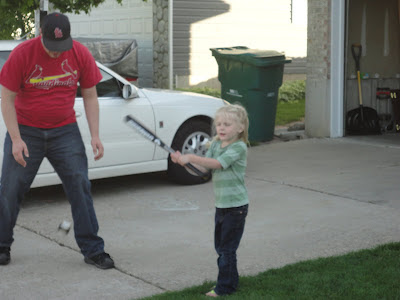 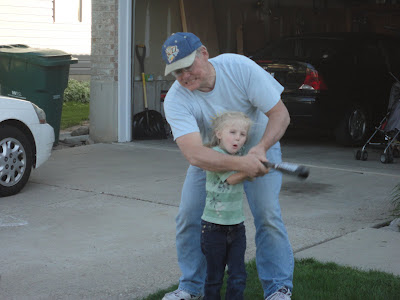 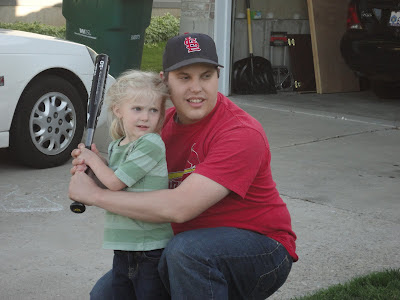 Jack and Grandma sat in the stands and cheered us on as well as seeing how well a baseball glove tastes. 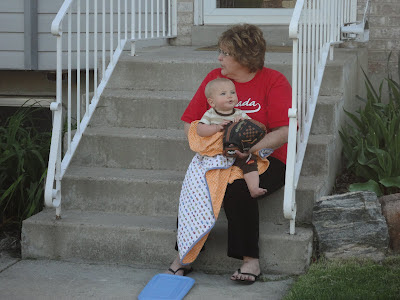 After it was over we all went out for ice cream, Lucy even shared some with her little brother, he liked it more then the baseball glove. 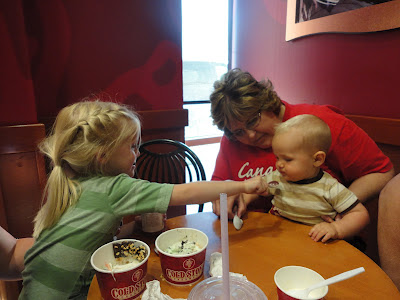 Posted by ScottBoomer at 6:08 AM 2 comments:

Yesterday Ariane ran a 5K race out in west Kaysville. It was the 2012 Deak’s run for Hope and it benefited the grandson of Arianes visiting teaching companion. Deakon was born with an extremely rare chromosomal abnormality, Ring 18. Essentially the second strand of DNA on his 18th pair is missing some pieces and has formed the shape of a ring, it can cause severe mental retardation and many who have the abnormality do not live very long. This is our neighbor, Jenny and her grand daughter who both also ran the race. 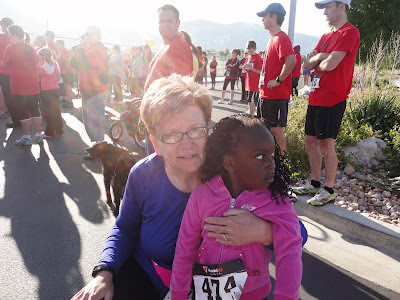 Ariane was not alone in her race though. She had Lucy and Jack with her, not really cheering her on but slowing her down a little. 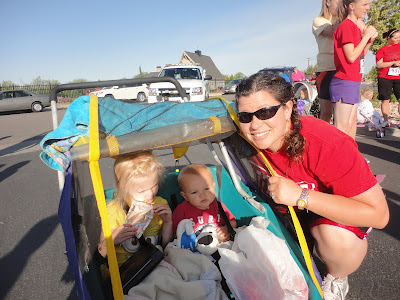 Here they are before the race. Ariane did the whole race while pushing these two in the stroller. She was quite prepared, there were snacks, toys and our little DVD player in the stroller with the kids, to try to help fend of boredom. Keeping the kids happy was probably harder than the race itself. Ariane did pretty good though, she finished with a time of 47:33.8, which give her a 15:18 Min/Mi, and it was good enough for 55th place overall (unknown how many were in the race). Not too bad for someone pushing a stroller with two kids. After the race they handed out popsicles, which Ariane gave to Lucy, since ridding in the stroller can be very hot work. 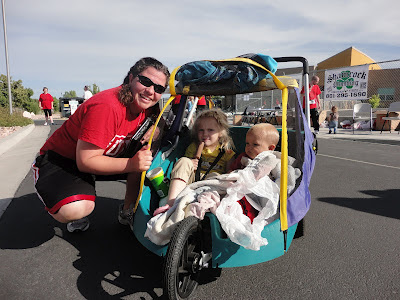 Ariane received a t-shirt for her efforts and they raised a lot of money for the research of the Ring 18 abnormality. 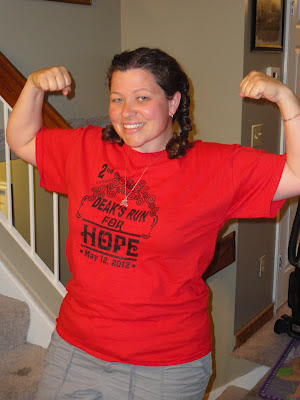 Posted by ScottBoomer at 6:16 AM 3 comments:

I don’t know how many of you knew that last Friday was an international holiday but it was Star Wars Day. According to the people at starwars.com, the official website of the Star Wars movies, May 4th has been designated as Star Wars Day. You may wonder why that it is, well its May the fourth, as in May the fourth be with you. It’s a play on words, if you don’t get it then think about it for a while. We celebrated the holiday by having my brother in law John and his wife Liz come over for a Star Wars Day party. We all put on our Star Wars shirts. 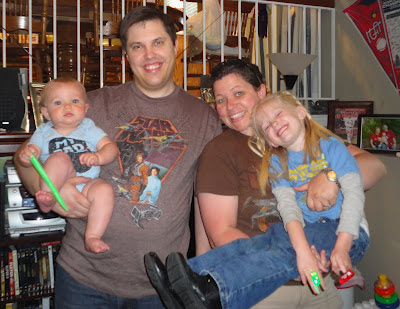 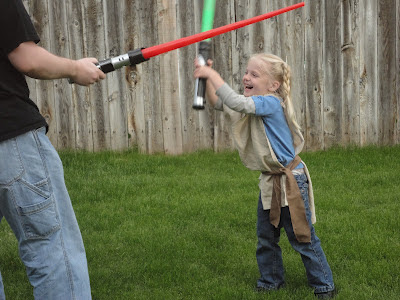 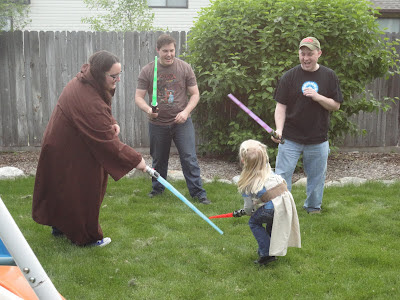 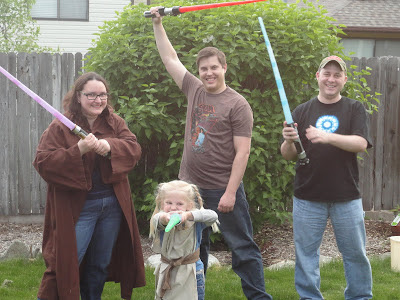 After our battle we went inside and played with some Star Wars toys. 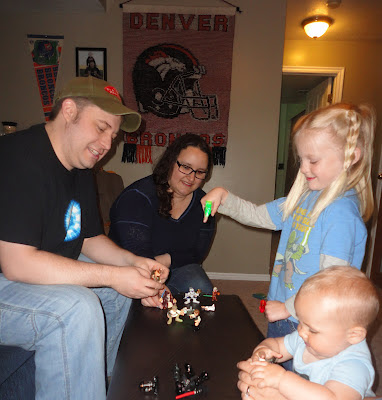