One of Jacks favorite activities is to go the fire station and see the fire trucks or the “we-lows as he calls them. The name “we-low” comes from the sound that the siren makes. He gets kind of excited when he sees them on TV as well, so the other day I decided to pull up some videos on YouTube of fire trucks. I didn’t really think he would sit and watch it for long but the video I pulled up was nine minutes long and he sat there and watched the whole thing. 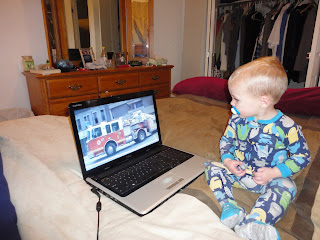 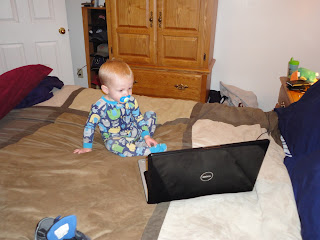 This has started quite the craze at our house. Jack often comes to me and says, “Daddy, puter, we-low”, or roughly translated he wants to watch fire trucks on my computer. So I pull out the computer and put a video like this one on. I have to say as a firefighter I’m pretty excited about this interest in fire trucks and I am going to do everything I can to keep it going.
Posted by ScottBoomer at 10:06 PM 2 comments:

A couple of weeks ago we had a promotion ceremony for the Kaysville Fire Department (KFD). The Department promoted three Battalion Chiefs, four Captains, three Engineers and three new fire fighters. I was one of the new engineers getting promoted along with A.J. and Keri. The ceremony consisted of a swearing in by the mayor and a badge pinning ceremony. 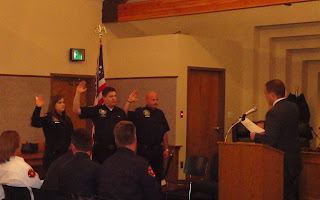 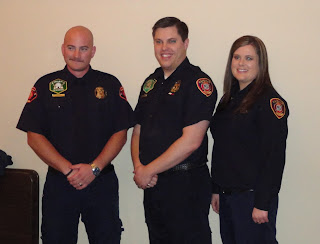 For the pinning ceremony I was supposed to have a family member or someone else come up and pin my new badge on me. Ariane was going to do it but at the last second Lucy said she wanted to do it. Originally she declined the invitation so I was surprised to see her come up. 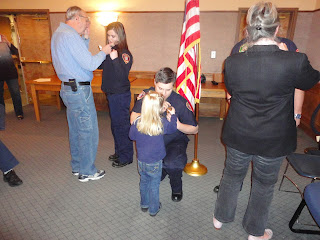 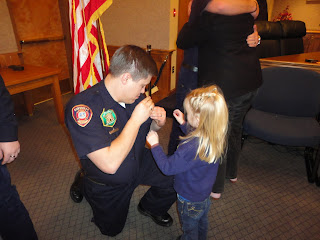 She needed some help doing it, after I got stabbed several times but it eventually got pinned on my shirt.

The whole family was there for the event, the kids even wore their firefighter shirts for the occasion. 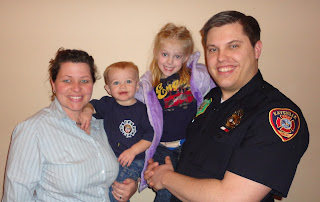 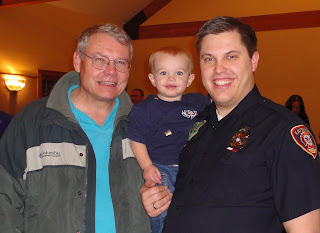 I also had two fathers in law and one mother in law come as well as my own Dad. 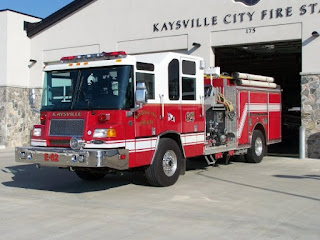 I am also assigned two department vehicles to make sure that they are maintained properly and that the equipment that they carry are in good condition.

To become and engineer I had to be certified to drive and pump the fire engine, which I had done a couple of years ago. To do this I had to take the states fire apparatus pumper course, which we did at Kaysville Fire and then pass the states written and skills test.

To get promoted at KFD once there were some openings I had to take a test. This consisted of a pumping scenario, getting water from the engine to the hose line in a timely manner and the right pressure, a driving test where they set up a bunch of cones and I had to show I could drive, and an oral board where I was asked questions about my knowledge about driving and pumping.

After all that I did not think I had done very well but it turns out that out of the five of us the tested I finished third overall, enough to get promoted. I ended up being moved up to second on the list when the number two guy got promoted to captain.

I have even had the chance to put my skills to use. We had a car fire where I was the engineer. 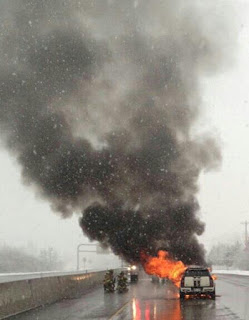 I managed to get us there in one piece and get water to the hose line. This job just keeps getting more fun all the time.
Posted by ScottBoomer at 6:05 AM 4 comments: