It seems my “Winter Olympics” post did as well as NBC’s ratings for the winter games, poorly. I didn’t get many responses from my loyal readers, who maybe aren’t as plentiful as I thought they were. Some how curling won the pole, I don’t really believe that curling is the sport that most of you enjoy watching the most in the winter games.

As the games are drawing to a close here soon the United States continues to dominate in the medal count, proving that we are the greatest nation in the world. If you haven’t quite gotten your fill of the winter games there are a few flicks you can check out to help ease you back into normal TV viewing, though Bob Costas does not appear in any of them and or some reason the summer games aren’t as popular for movies.

The Cutting Edge- Hockey player gets hurt at the Olympic Games, can’t play hockey anymore, is then recruited by a figure skating coach to be partners with a woman who can be bested described as an ice princess. This creates a lot of romantic tension between the two as the struggle to co-exist and compete on the ice. This is really more a chic flick, some thing you men out there might not like as much but definitely will appeal to the ladies. Not bad as far as chick flicks go.

Blades of Glory- Another pairs figure skating movie, but is definitely not like “The Cutting Edge”. In this one Will Ferrell and Jon Heder (Napoleon Dynamite) play two male figure skaters who are banned from their sport. A coach finds a loop hole though that allows them to compete in pairs skating. I found the movie hilarious. Definitely one for the guys, though you ladies may also find it humorous. Guys if your girl wants you watch “The Cutting Edge” tell her you will, but only if she’ll watch this one with you. Seems like a pretty good trade off to me. Probably not one you should watch with the kids though.

Cool Running’s- Based on the true story of the Jamaican Bobsled team, though it’s hard to say how much is true. The Jamaicans enter a bobsled team in the Olympics, coached by John Candy, it’s a light hearted look at the struggles, training and competition of team from a country with no snow. On a related note, the Vancouver games were minus the Jamaicans this year for the first time since the Calgary games. It’s fun humorous movie that the whole family can watch together.

Miracle- Also based on a true story, this one tells the story of the 1980 men’s hockey team, known as the “Miracle On Ice”. This is a great film that really shows the grit and determination of a young underdog team that upsets the big Soviet Union power house. If you don’t know the story of this team then you really haven’t ever watched a winter Olympics before. This is another great one to watch with the kids.

You've got it all here, comedy, insperation, romance and drama. Hopefully these can help your appetite for winter sports once the games have come to an end or at least get you buy until the NCAA basketball tournament starts.
Posted by ScottBoomer at 3:18 AM 2 comments:

The winter Olympics are here, I’d like to take this opportunity to give my take on the Vancouver games. Much like the summer games the winter Olympics are full of sports that I wouldn’t watch if it weren’t the Olympics. Actually if you take out ice hockey, which I only watch occasionally any way, it’s only sports that I watch when it’s the Olympics. It’s also a chance to take a little refresher in geography and be reminded that there are countries out there like Latvia and Liechtenstein. Also makes me wonder what countries like Ghana, Bermuda and others where they have no snow or ice are doing there.

A lot of the sports are how fast you can ride some thing down a hill. Luge, bobsled, snowboarding, skiing and skeleton for example. It’s exciting to watch for the first few runs but then it sort of becomes the same. I think tubing should also should be an event; I’d love to see people ride an old inner tube down a mountain. 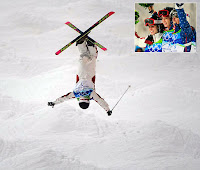 Several also involve jumping in the air while going down the hill and maybe even doing tricks in the air like half pipe snow boarding, freestyle skiing and ski jumping It’s pretty amazing what these athletes can do but like the sports mentioned before it’s all kind of the same to me after the first three or four athletes.

If your event involves wearing sequins on your out fit, or if you refer to what you’re wearing as an “out fit” than you probably are a figure skater, or the guy who designs your hokey jerseys needs to be fired. This is a sport that’s tough to watch even during the Olympics because it’s so boring. One way to spice it up is to turn off the sound on your TV and put in one of your CD’s and let the routine go to one of your favorite tunes, in 2002 my friends and I enjoyed watching Sasha Coen do her routine to Jungle Boogie. I still haven’t been able to figure what the difference is between Ice Dancing and Pairs Skating. 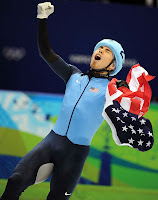 Speed skating is like track on ice. Short track is pretty easy to watch, it goes quick, the rounds go fast and they do a bunch of skaters at one time. Long track is a little different, it takes a while and they only run two skaters at a time. Plus long track is missing Apolo Anton Ohno, who is not only known for his speed skating but also winning Dancing With the Stars. Maybe to keep the reality TV bit they could get Shaquille O’Neil to do his show Shaqs Big Challenge with Apolo. 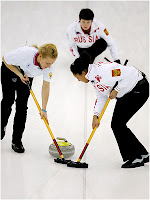 And then there’s curling. I don’t even know if this is really a sport. If you’ve never watched a match then consider your self lucky. It’s an hour of your life you’ll never get back if you do. All though it is the only Olympic sport I have any hope of winning a medal in. If this is an Olympic event then I think the summer games should add biliards and bowling.

My favorite is Ice Hockey. I enjoy team sports, there are no judges involved and I think it’s fun to watch. So what is your favorite event? Take the pole and leave a comment telling us why. 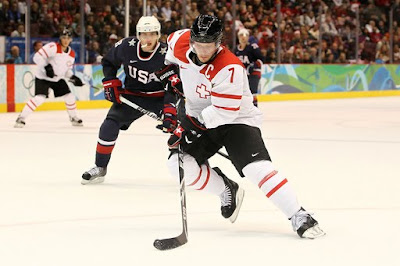 And what is up with the Swiss hockey uniforms? It's like they ran out of money for the uniforms.
Posted by ScottBoomer at 4:13 PM 2 comments:

Yesterday was Lucy's third birthday and we had a big party for her. She was so excited to have a house full of people to play with, eat cake and of course get presents!

The theme was Spongebob Squarepants. We had the cake, a table cloth, cups, movies and some toys. We had all most all things Spongebob. 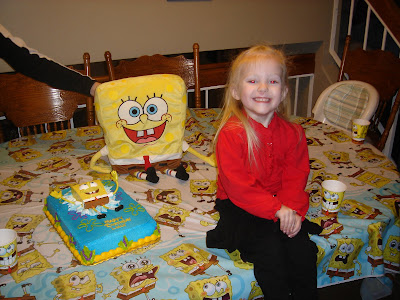 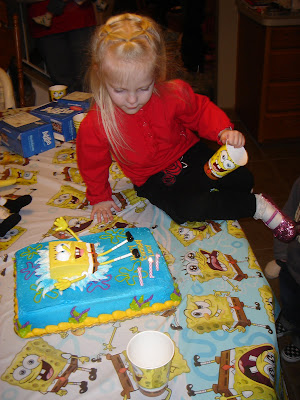 Lucy trying to blow out the candles 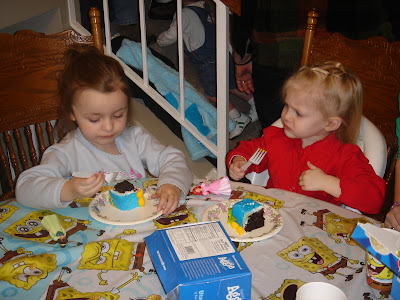 Lucy and her future cousin to be River enjoying their cake.

It was a great party. Thanks everyone who came or gave a present. Lucy had so much fun.
Posted by ScottBoomer at 7:45 PM No comments:

As many of you already know and for those of you who don’t, I got engaged last week to my amazing girl friend Ariane. Let me tell you how it all happened.
After we had discussed marriage one night and decided that it was what we both wanted I went about planning how to propose. All I really knew was that I wanted to surprise her. I started thinking up ways to propose that might be original and surprising.

After mulling over a few ideas I settled on one. I thought it would be cool if I took her to the fire station and had Davis Co. dispatch page out my proposal over our speakers. Of course this would mean all the department and most the county would know as well, which my fire department would find out any way and not that many people outside of Kaysville Fire would know who I am, so that wasn’t really an issue. After getting the approval from our chief I decided to go with that plan.
I talked with Arianes dad one night and he gave me permission and blessing to marry his daughter. His one question to me was, “Are you planning on taking her to the temple to marry her?” And I am going to do just that.

I went to few jewelry shops and found a ring that I thought was classy, elegant and beautiful just like Ariane.

When I found a good day to go through with this I planned a date with Ariane. I told some family and close friends what was happening and invited them to my house to have a little engagement party for Ariane and they could listen to dispatch make the announcement on my pager. I told her the day of the date that I had to work late at the fire station to cover for another firefighter and I asked her if she would like to come up to the station and have dinner with me and my partner and she agreed.

So after everyone had gathered together at my house I went over to the station to wait for her arrival. Once Ariane got there I excused my self, telling her I had to make a phone call. I went and called dispatch. About a minute later our alarms went off and dispatch said, “Kaysville Fire, informational page only. Ariane will you marry Scott?” and I got down on one knee and pulled out the ring.

She was pretty shocked. As she told me later, “I heard your alarms go off and thought, “Cool I get to see them go on a call” and then “Wait, that was my name, oh my gosh!” At first she said nothing, which had me a little worried. After she realized what was happening she said, “Yes.” The guys at the station took some pictures of all this. 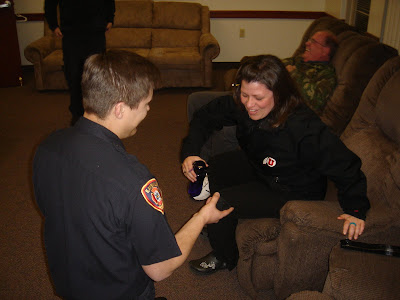 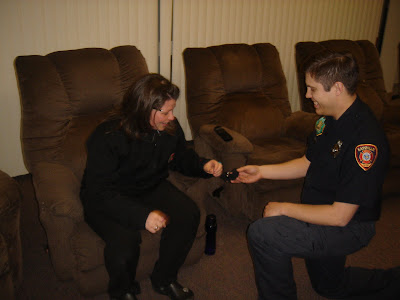 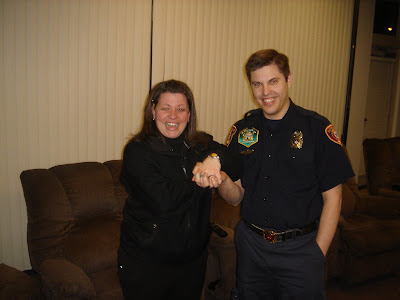 Then we got in the car and headed back to my house. Ariane said, “I need to call my Mom and my sister and let them know.” I told her to wait for a little bit.
We pulled up to my house and I told her her parents were at my house along with her sisters family, some of my family and some friends. We went into a house full of people eager to great us. She was so surprised that everyone had come there to see her. 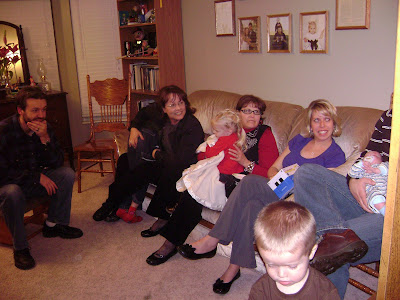 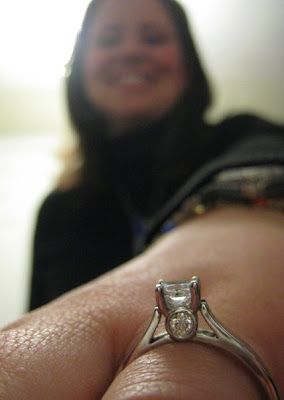 It was a great night. I love Ariane and I am so happy to be marrying her, she is amazing. 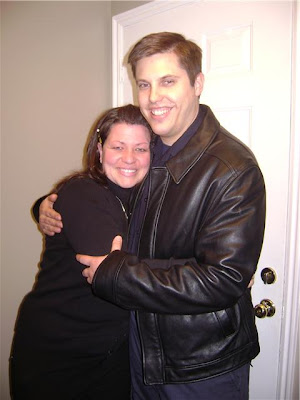 No, we don’t know when the wedding will be. I’ll let you know as soon as we do.
Posted by ScottBoomer at 11:21 AM 4 comments: