I know we are at the end of February and that valentines day was two weeks ago, still I thought many of you would like to know how a hopeless romantic like myself celebrates this day of love with his wife.
First I bought her some roses and a valentines day card that says some thing romantic and really expresses how I feel about my wife. This year I went with the Hannah Montana card that said "You shine valentine". Keeping with my Hannah Montana obsession. Please see my Christmas post for more information regarding Hanna. The pose she uses on the card is the same as the pose for the month of November on our calender. Apparently she only had one photo shoot and just uses those over and over on various products. 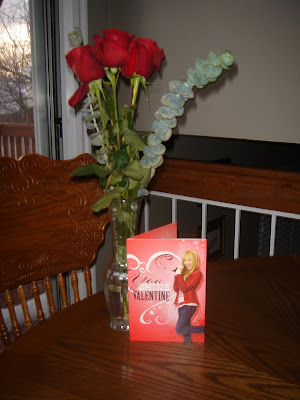 Lariann bought me a pie. She sure knows how to please me.

That evening we went out to eat at a very romantic yet reasonably priced restaurant. We went to Javiers in Ogden, it's a Mexican joint. Actually it's one of Lariann's favorites so she was really excited to go there.

Then we went to the always romantic Dee Event Center in Ogden to watch the Weber State Wildcats play the Portland State Vikings in a match up of two of the Big Sky conferences best teams. The Wildcats came out on top 78-68 getting alot of help from senior guard Kellen McCoy, who was mired in foul trouble in the first half,but scored 14 of his 16 points in the second half. 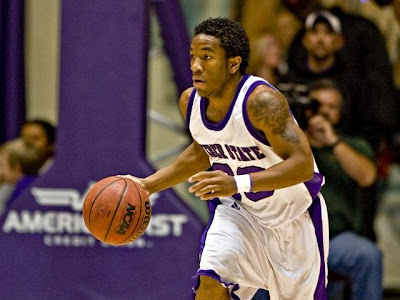 I know what you're thinking that basketball is not very romantic but Lariann and I used to go to games all the time when we were in college so it was a stroll down memory lane for the two of us.
So guys and gals there you go. A valentines day both Lariann and I could enjoy.
Posted by ScottBoomer at 1:39 AM 2 comments:

Last week was Lucy's birthday and we had a little party for some friends and family who live close by.
She had the Cars cake which she thought was the greatest thing ever. She wasn't so sure about blowing out candles.
She got some toys and clothes. Opening presents actually went a little better then it did at Christmas time. She was excited to open them. The other day she asked me for some more presents. So here are the photo highlights. 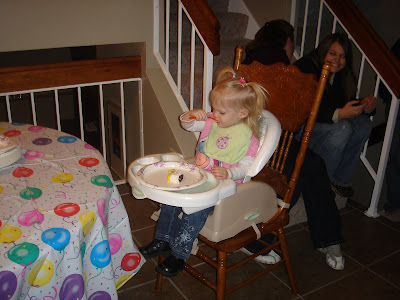 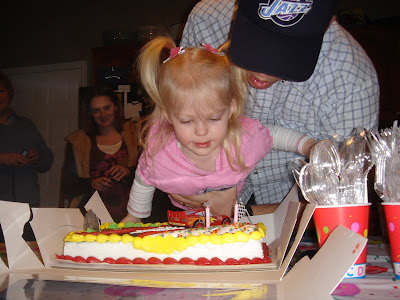 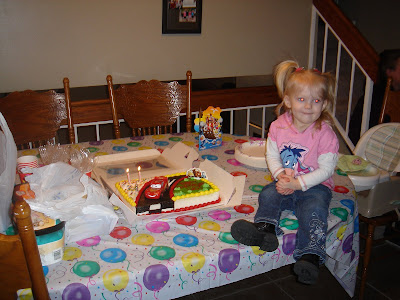 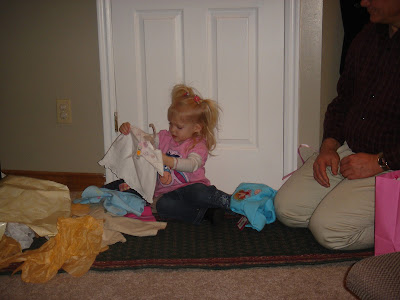 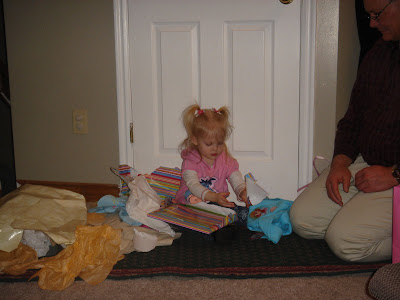 I had the chance to talk about what 10 DVDs I would want to have with me if I were on a deserted island. If my soon to be two year old daughter Lucy had to pick these would be hers.
This is based mostly on what she asks for most often.
Now when I say Lucy watches a movie she will sit for about 10-15 minutes and watch, then she'll get up and go do something else for about 10-15 minutes at which point she either remembers that the movie was on or we tell her we are going to turn it off. At which time she comes back in and sits and watches for another 10-15 minutes and the whole cycle starts all over again.
I'm going to group these into three groups. The first are movies she'll watch if we put them in but doesn't really care about them, she never asks to watch them.
The second are movies she asks for on very rare occasions. Usually the day after she watches it but they seem to be easily forgotten. What ever the reason they just don't have the staying power to be in the regular movie rotation.
The third are the ones we watch at our place at least weekly some of them are nearly daily.

Here, in no particular order are the not so favorites-
Sleeping Beauty
The Jungle Book
Monster Inc.
Aladdin
The Emperors New Groove

6-Veggie Tales:The Ultimate Silly Song Count DownThis is the only non-Disney DVD to appear in this list. This movie at my parents house and she asks to watch when we are there pretty regularly, nothing like 4 or 6 adults and one toddler all watching it together. We have some of the songs on CD and she loves to listen to them.

5-Peter PanThis one was very popular about six months ago but seems to be loosing it's popularity. She really seems to enjoy the crocodile and anytime Tinkerbell is in the movie. 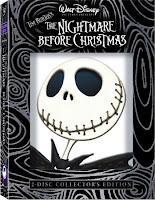 4- The Nightmare Before Christmas This one surprised me. This movie seems a little dark and possibly scary to an 18 month old but Lucy loves it. She calls it, "Jack" who is the main character for those of you who aren't brave enough to watch this your self or show it to a young child. Unfortunately for Lucy her parents got tired of hearing Halloween and Christmas songs in January so we decided that this one would only be out between October and the end of December.

3- Tinkerbell I'm not a big fan of the straight to DVD movies and this is one. But I went against my better judgement and got it anyway for my little girl. And it's a big hit. I myself have been asked several times what I thought of it and my reply is usually, "It's a great movie for a little girl, but I am an adult male so I'm not that into it." Lucy loves it, especially the part where as Lucy puts it Tinkerbell makes a, "Terrible mess." Plus this movie came with a little Tinkerbell purse so it was like two gifts in one, aren't I a great Dad!

2- The Little Mermaid We bought this movie for Lucy before she was born back when Lariann was pregnant with her. She loves this one a lot. At least once a week we hear, "Watch Mermaid." Lucy also has several Little Mermmaid toys and some clothes. Ariel is very popular at our place.

1- Cars
This is the movie she asks to watch the most. This one comes close to being watched daily. We have a lot of cars stuff at out house to. Books, toys etc... I did not expect this when we first had a baby girl.