It was unbelievable today. We went on an auto accident on I-15 this afternoon in Kaysville. There were reports of several cars involved and at least one person was unconscious. We were the second ambulance on scene.
When we pulled up the life flight helicopter was just landing to take away the unconcious guy. When we asked one of the state troopers what had happened he told us that this little car had hit this truck. Now the little car definatley took the brunt of things. Then he tells us that the passenger in the truck got out and went over to the car and started punching the unconscious guy.
I couldn't belive it, what a coward to go over and pummel some one who can't even defend themselves. He ended up going to the hospital to just to get checked out, but UHP assured us he was going to jail as soon as he could.
Posted by ScottBoomer at 10:15 PM 4 comments:

My cousin Craig passed away last week. Craig and I had been really close growing up since we were only 8 months apart. I had to speak at his funeral yesterday. It was a bitter sweet/talk. It was good to remember some of the good times we had, alot of people laughed as I told about some of the stuff we've done. But it is also hard to say good-bye to someone who has been a friend my whole life.
Below is his obituary.
Craig Niel Bredthauer 1978 ~ 2008 Craig passed away unexpectedly on June 11, 2008. He was born November 28, 1978 to Niel B. and Janet Bredthauer. He served an honorable LDS mission in Macon, Georgia. He married his sweetheart Christiana Adams June 12, 2002 in the Bountiful LDS Temple. He is survived by his wife; parents; sister, Sheila (Paul) Whitney; brother, Mark (Jillian) Bredthauer; grandmother, Arlene Harris; many loving aunts, uncles and cousins. Preceded in death by his grandparents, Spencer Harris, Henry W. and Marian Bredthauer. Funeral services will be held at 11:00 a.m. Saturday, June 21, 2008 at the Orchard 10th Ward Chapel, 3317 South 800 West, Bountiful, Utah. Friends and family may call Friday evening from 6:00 - 8:00 p.m. at Russon Brothers Bountiful Mortuary, 295 North Main and Saturday morning 9:45 - 10:45 a.m. at the church prior to services. Interment- Lakeview Cemetery. Online guest book at www.russonmortuary.com
Posted by ScottBoomer at 6:46 PM 2 comments: 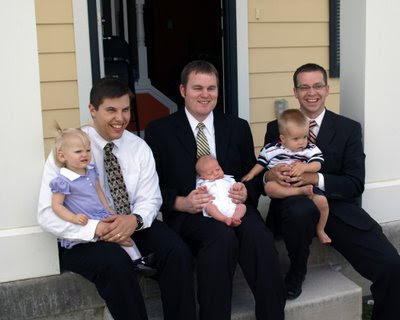 Here's a picture of myself and Lucy with my friends, Dave Barton and Marc Lunt, and their sons, Eddie and Calvin. Dave blessed his son this last Sunday and had this picture taken. I've been friends with these guys since high school, and it's amazing to see how far we've come since then. We went from wild, out-of-control teenagers to daddies, and it feels like it happened overnight.
Posted by ScottBoomer at 12:15 PM 3 comments: