A lot of teams have famous fans, the lakers attract celebrities in droves, yankees games are always a hot spot to find celebrities, Jerry Seinfeld attends mets games and even the L.A. clippers have Billy Crystal .

Here’s a look at the celebrities, who like myself support the Cardinals.

John Goodman (Actor) - A St. Louis native, John was raised as a Cardinals fan. He is often seen at home games in St. Louis, as well as Spring Training games in Jupiter, Florida (as seen in the picture). John is also an investor in a sports station in St. Louis - 550 KTRS. 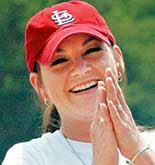 Gretchen Wilson (Country Music Singer) - She grew up listening to Cardinals games with her grandpa. She sang the National Anthem at one of the World Series games in 2004, and even released "Redbird Fever," a Cardinals version of her hit "Redneck Woman." 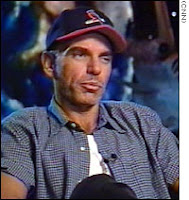 Billy Bob Thornton (Actor) - A native of Arkansas, Billy Bob grew up a Cardinals fan. He also narrated the Cardinals 2006 World Series DVD. He played in the All-Star Celebrity Softball Game in 2009 as part of the All Star game played in St. Louis. Also threw out the first pitch at a Cardinals game.

Sara Evans (Country Music Singer) - She was born and raised in Booneville, Missouri. On her new album, Real Fine Place, she has a song titled "Missing Missouri." The lyrics include: “Tobacco fields and bubble bees, And the Cardinals playing on TV, Caught up in missing Missouri”. She also has sung the national anthem at Cardinals games and God Bless America at the 2009 All Star game in St. Louis(pictured). 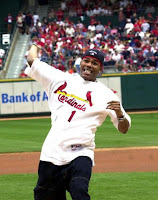 Nelly (Rapper) - Born and raised a fan, Nelly often wears apparel featuring St. Louis sports teams. One of his videos was even shot at Busch Stadium and featured then-Cardinals second baseman Fernando Vina. Nelly also participated in the All-Star Celebrity Softball Game in 2009 and also thrown out a first pitch before a Cardinals game (pictured).

Jenna Fischer (Actress) – A St. Louis native, she grew up cheering for the Cardinals and also played in the All-Star Celebrity Softball Game in 2009 (pictured).

There they are, the famous Cardinals fans. Some country, Some acting and a little bit of rap.
Posted by ScottBoomer at 6:03 AM 2 comments: