Lucy was a little confused about what the Easter Bunny does exactly. When she got up Sunday morning she came into our room and told us what he was going to bring her, which was mostly a lot of toys. She seems to think that he operates much like Santa. After I explained that the Easter Bunny doesn’t bring a lot, if any toys mostly just candy she had a break down. Once she calmed down and went and found her Easter basket she seemed to forget all her previous concerns. 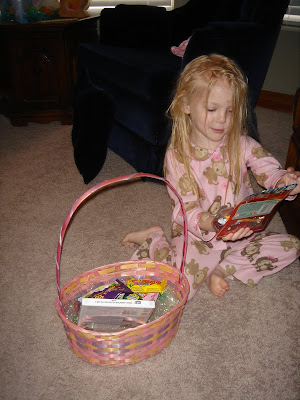 She did get a small toy and a movie in her basket in addition to all the candy, special thanks to my brother-in-law Devin who got us a bunch of candy for free from his work, you rock man.
There was also a new outfit for her. 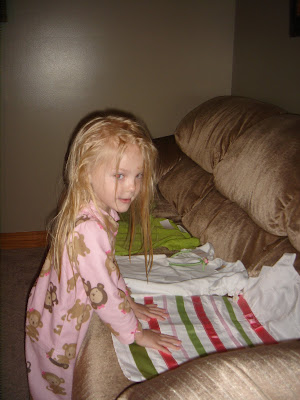 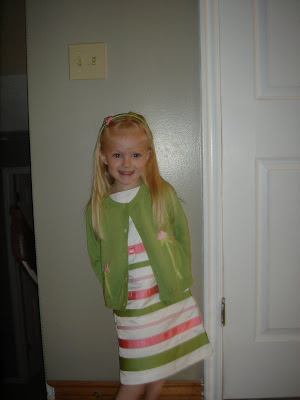 Lucy and Ariane went up to put some new flowers on Larianns tomb stone, along with Grandma and Grandpa Evans. 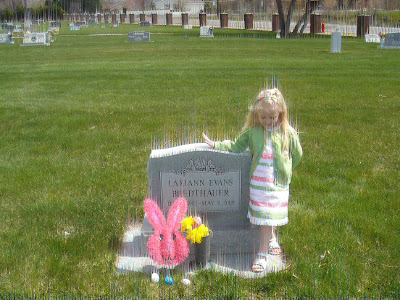 After church we went up to Ariane’s parents where the Easter Bunny had hidden many eggs for Lucy and her two cousins to find. Another special thanks for my sister-in-law Chelsea who put candy in all the plastic eggs for the kids to find. Here are some pictures of Lucy and River hunting for eggs, not pictured is her other cousin Liam who was off somewhere away from the girls. 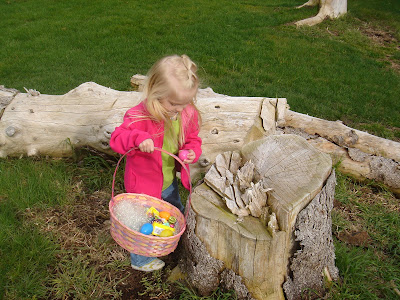 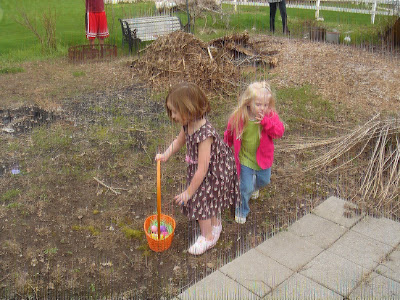 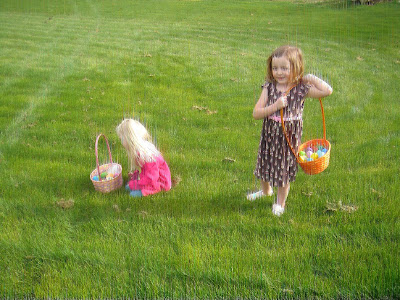 We had a really fun Easter and I will try to explain to Lucy about the Independence Day celebration before she expects Uncle Sam to come through our door passing gifts.
Posted by ScottBoomer at 11:32 PM 5 comments:

A long time ago in a galaxy far, far away……
Or rather several months ago in this galaxy…

My cousin Sarah sent me a link to this video. I think it has a very important mesasge, so please watch it before you read the rest of the post.

I have taken this video to heart and have immersed my Lucy into the “Star Wars” universe.

I have shown her all six of the “Star Wars” movies. She watches and enjoys them, but there are parts of the movies where there just isn’t enough happening to keep a small child’s attention. So I got Lucy her own “Star Wars” movie. It’s an animated CGI movie called “Star Wars: The Clone Wars”. It’s a little faster paced with more action just what a little girl needs to keep her attention.


“Star Wars” is also in fashion at our house, Lucy has several “Star Wars” shirts and Ariane has even gotten in on it as well. 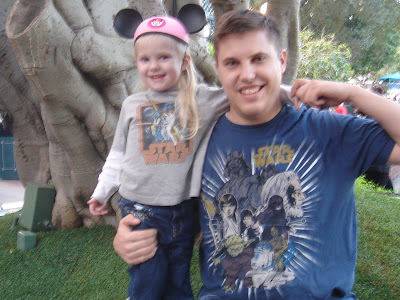 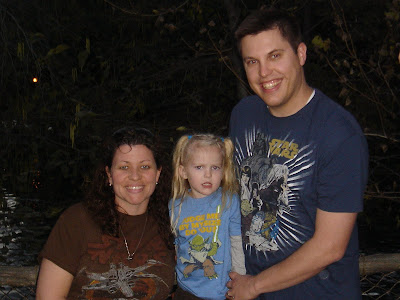 For last Halloween you may recall that Lucy requested we be “Star Wars”, so we went as Jedi Knight and Padawan. 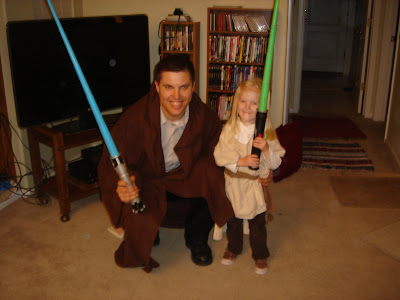 Lucy asked to have a “Star Wars” party this year, so I went all out with table cloths, cups, and plates even a Darth Vader to hang on the door. Lucy’s aunt Liz was nice enough to make an R2-D2 cake for her. I'd also like to thank my friends Marc and Hali for going and buying "Star Wars" shirst for their whole family just for this occasion. 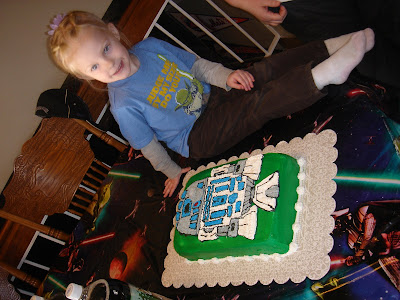 Speaking of Aunt Liz, her and Uncle John gave Lucy some “Star Wars” pancake shapers for this last Christmas. Lucy loves having pancakes shaped like the Millennium Falcon and an X-Wing fighter. How ever she refuses to eat the Tie Fighter saying she doesn’t want to eat the bad guy’s ship. Maybe it doesn’t taste as good, who knows? 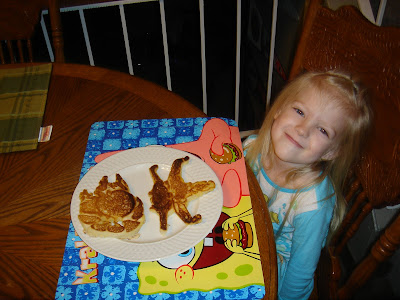 While in Disneyland Lucy got to meet some “Star Wars” characters, she thought the Storm Troopers were the best, she said they were funny and were nice to her. 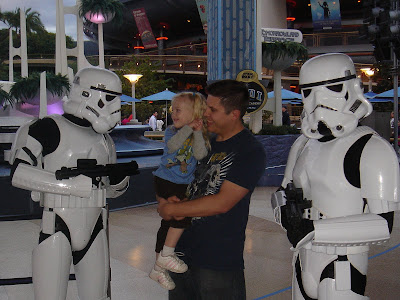 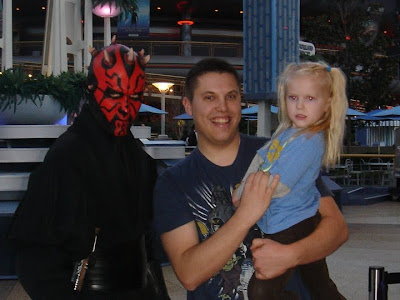 She did not say the same things about Darth Maul, she said he was mean and scary.


Lucy and I enjoy playing “Star Wars together as well. We have light saber fights and she as some of her own action figures, because mine are too nice to let a small child play with. 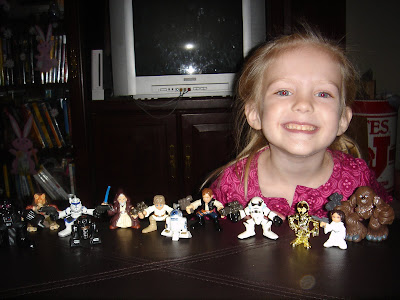 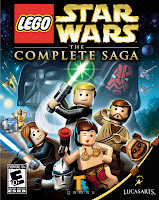 Lucy thinks it’s great when we play “Star Wars" on the Nintendo. We have the “Lego Star Wars” game for our Wii. Mostly it’s me playing the game while she holds the paddle and jumps around thinking she is playing as well. Hey what ever makes her happy? 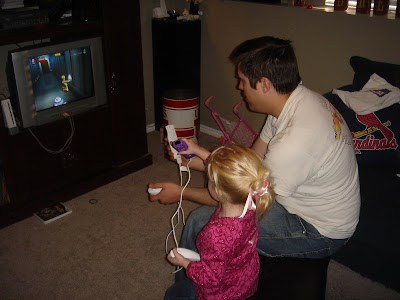 Her favorite character is R2-D2. She's really cute when she prettends to be R2 and runs around the house making beeping, whining and whirring noises to try and imitate R2-D2 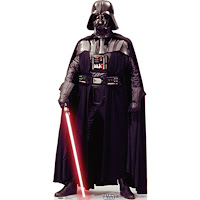 Her least favorite character is Darth Vader, though Darth Maul seems to be a close second. She refuses to play with the Darth Vader toy, which is then who I usually end up playing with, and has so far tried to throw him away and give him away to other kids. I hang on to him just incase she changes her mind.

Judging by the evidence here and I say I'm doing a prett good job of teaching Lucy all about "Star Wars". 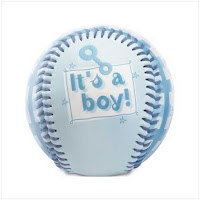 Ariane had a visit with the obstetrician last week and we found out that we are having a boy. Arinae was surprised she thought the baby would be a girl and Lucy was angry when we told her the baby would be a little brother. She really wanted a sister and she has been trying all kinds of ways to change it into a sister. We still have about 20 more weeks to get her used to the idea that the baby will be a boy.

As for me, I’m just excited to be having another baby. There was a time that I was certain that Lucy would be my only child. I had no feelings either way, I’m just happy to be expanding my family again.

Now we can hand down all the baseball and other sports shirts that I bought for Lucy to our new son. If you’re in need of ideas for gifts remember my favorite teams are the St. Louis Cardinals, Denver Broncos, Utah Jazz, Weber State Wildcats & Utah Utes. Also anything firefighter themed would also be awesome.

So now we can open it up to any and all name suggestions for boys. I look forward to turning your ideas down.

If we don’t pick your name remember: Your ideas are very important to us. However we have decided to go in a different direction. We look forward to working with you again in the future.
Posted by ScottBoomer at 11:53 AM 9 comments: