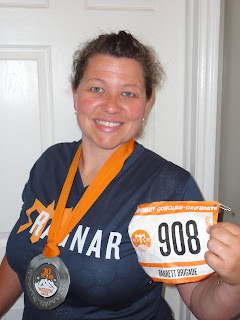 I know I have been neglecting my blog as of late, but I don’t feel like there has been much worth blogging about recently.  However I did neglect to blog about one very important event that happened last June, Ariane ran the Ragnar relay race.  For those of you that don’t know what that is, it is a realay race from Logan to Park City run in teams of 12.

Arianes team was made up of members of my sister in law Brooke’s family, they called themselves the Barrett Brigade.  Ariane was sort of a last minute fill in, she had only a few weeks to prepare for this.  Every one ran three legs of the race.  Araine had a two mile stretch a six mile stretch and then another two mile stretch.  The first one she said wasn’t too bad but the next two were pretty rough, there was a lot of hills on those other two stretches, she called me after her second stretch and said she was sure she was going to die.
She was lucky enough to run the “glory stretch” as she called it, meaning she ran the last leg of the race.  She was pretty beat when it was all done, but I am really proud of her for doing it, she is amazing. 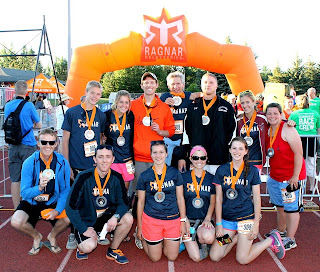 Posted by ScottBoomer at 5:49 AM

Ariane's so awesome! Maybe next year you can run it with her!